What is aperture in photography 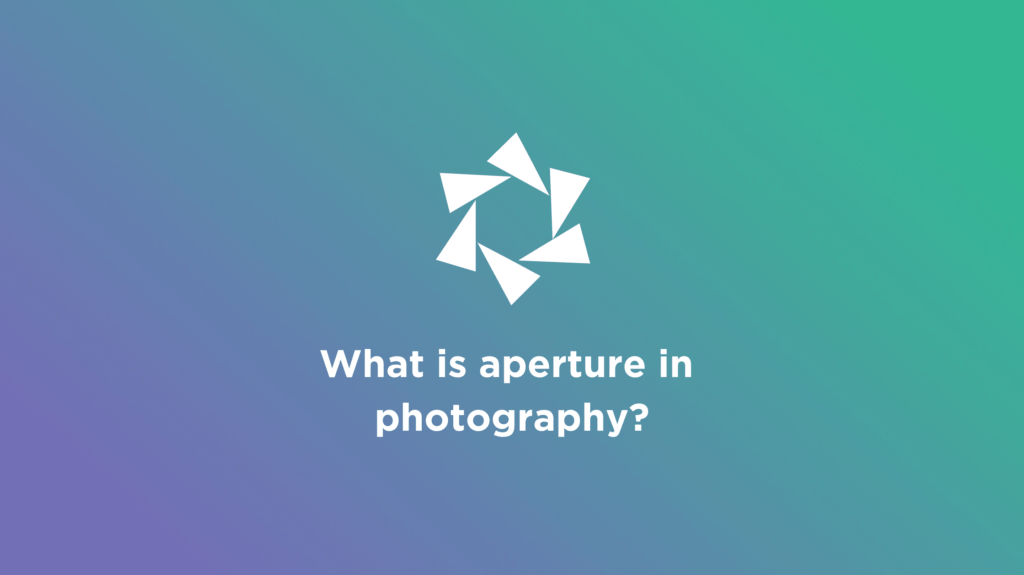 Ask any photographer what is the most important setting they use on their camera, and nine times out of ten they’ll tell you it’s their aperture.

What is the meaning of aperture?

In this guide, we’ll describe the definition of aperture and explain how you can use it to properly expose your photographs and maximize their creative potential.

Aperture can be defined as a hole or opening. In photography, your aperture is simply an opening in your lens that allows light to pass through it and into your camera.

When you press your camera’s shutter release button, that hole opens to allow whatever scene you’re shooting to be ‘seen’ by your camera’s sensor. Aperture defines the size of that hole.

One way to think of aperture is to compare it to the pupil of your eye. When you enter a dark room or walk outside into the bright sun, your pupil will expand or contract to adjust to the light.

While this seems simple enough, the concept of aperture is complicated by its numbering system.

What is an f-stop?

The f-stop (also known as f-number) is the ratio of your lens’s focal length to the diameter of the pupil.

That’s technical language to describe the size of your aperture. F-stops are standard measurements across the board that you’ll recognize because they’re always shown with a letter ”f” followed by a number.

How does aperture affect your photographs?

To understand how changing your aperture setting will affect your photographs, it helps to look at the exposure triangle.

Each of the three elements of the triangle works together to lighten or darken your image. When you adjust one of them, the other two are also affected.

In the case of aperture, a lower f-stop (a wider aperture) produces a lighter photograph, whereas a higher f-stop (or a smaller aperture) results in a darker image. What’s more, your aperture setting will also affect the depth of field, or how much of your photograph is in sharp focus.

As we’ve mentioned above, setting a wider or smaller aperture results in your photograph being either lighter or darker. If your photo is overexposed, you can reduce the size of your aperture to darken your image.

How aperture affects depth of field

You may have noticed in the above example that, as the aperture becomes wider, less of the image is in focus.

Depth of field (DoF) defines the zone in front of and behind your subject that appears in focus. Some images, like portraits and macro shots, have an extremely shallow depth of field with a crisp focus on the subject and soft, blurry background. Conversely, most landscapes are tack sharp from foreground to background — indicating a very deep depth of field.

Increasing aperture decreases your depth of field. In other words, a small f-stop will give you a blurry background.

On the other hand, small apertures increase your depth of field. So, if you want your entire scene in sharp focus, make sure you program your aperture to a high f-stop.

Think back to our discussion about the exposure triangle above. Remember, all three elements of the triangle work together to create your photograph, and when you adjust one of them, exposure will be affected unless you also adjust one or both of the others. Keep this in mind when setting your aperture.

If you plan to use a wide aperture to achieve a blurry background, you’ll probably get a bright image. In that case, you’ll need to speed up your shutter or lower your ISO to compensate.

If you want your image in focus from front to back, your aperture will limit the amount of light that enters your camera, so you may need to push your ISO higher or slow down that shutter speed to achieve the correct exposure.

Don’t worry if this is still confusing, we’ll give you some example scenarios a little later.

What aperture should I use and when?

Now that you have an idea of how aperture affects your images, here’s a basic guideline for what f-stops are useful in what settings. Keep in mind, however, that your lens’s focal length can also affect the depth of field.

Here are some example scenarios and the settings that were used to photograph them:

We’ve mentioned above that landscape photographers use small apertures to ensure that their entire scene from front to back is in focus. This is often only achieved with the help of a tripod and a slow shutter speed, especially if the photo was taken at sunset when light is limited.

When shooting indoors, it’s wise to set your camera to use a wide aperture for a few reasons.

First, most indoor settings are lacking in light, so you’ll allow more light to reach your sensor. Second, that opening up wide will help blur out background objects that would otherwise distract from your subject.

Sporting events can prove to be a challenge to photograph — bright light, harsh shadows, lots of fast-moving action, and distracting backgrounds. Luckily, you can make adjustments around your exposure triangle to get the look you’re going for.

Here, the photographer used a fast shutter speed to freeze the motion of the players and capture the flying dirt. To compensate, he opened the aperture up to f/6.3 to let in enough light to properly expose the shot.

Most scenarios can be photographed with a range of apertures to achieve proper exposure, but when it comes to shooting the Milky Way, the only way to capture it is with a wide aperture.

Conditions for photographing the galaxy in our night sky are extremely dark. For that reason, you’ll need to use a tripod, stretch the limits of your camera’s ISO capabilities, and use long shutter speed in addition to a low f-stop to get enough light into your camera’s sensor to adequately capture it.

But, when you get it right the results are breathtaking!

How to set your aperture

The exact method of changing your aperture varies slightly from camera to camera, but the general instructions are the same. First, you’ll need to set your camera to Manual, Shutter Priority, Aperture Priority, or Program Mode.

If you’re using an entry-level DSLR or mirrorless camera, you can access your aperture through a menu. There, you’ll be able to select the value you want. Remember, it will be indicated by an f-stop.

If you’re using a prosumer or higher-end camera, you more than likely can access your aperture with a button on the top or back of the camera or by spinning one of the wheels to quickly change it. If one doesn’t already exist, you probably have the option to customize a button for that purpose if you desire.

Check your camera’s manual for the exact instructions on the easiest way to change your aperture setting as, since you’ve just learned, this is a setting you’ll want to change often depending on what you photograph.

Minimum and maximum aperture of lenses

When setting your aperture in-camera, you might notice that you’re limited to how high and how low the camera will allow you to set your f-stop, and that that range changes when you attach a different lens to your camera. That’s because each lens comes with its own range of apertures.

For example, a high-end prime lens might have an f-stop range of f/1.2 to f/16 — you won’t be able to set your aperture beyond that range. Other lenses might start at f/4 and yet others might have a variable aperture.

You can easily find out the aperture of your lens because it will be printed somewhere on the barrel of your lens next to the focal length.

What is a variable aperture lens?

Some zoom lenses come with a variable aperture, meaning that the widest available aperture changes based on the focal length.

What is Aperture Priority Mode?

Aperture priority is a semi-automatic setting in your camera that will allow you to set the aperture you want and then your camera will automatically choose the shutter speed and ISO to properly expose the image.

This is a great setting for beginners who aren’t yet familiar with how shutter speed and ISO affect exposure, but they want to use aperture to achieve a shallow depth of field. Most cameras can be set to Aperture Priority Mode by turning the dial to “A” or “Av,” depending on the brand of camera.

While aperture will easily lighten or darken an image, where this setting really shines is in its ability to add creative effects to your photographs.

Here are some examples of effects that can be achieved by carefully adjusting your aperture:

As you’ve learned from this guide, the aperture is a critical setting in photography. Many would argue it’s the most important setting of all!

It not only affects the exposure of your image but has the single greatest impact on the artistic aspect of your photos, too.

Aperture may seem confusing right now, but knowing what f-stop to choose for a particular situation will eventually become second nature to you.

In the meantime, try setting your camera to Aperture Priority Mode and go take some photos. Adjust your f-stop up and down and take more photos. See how those changes affect the look of your background? Did you get the results you expected?