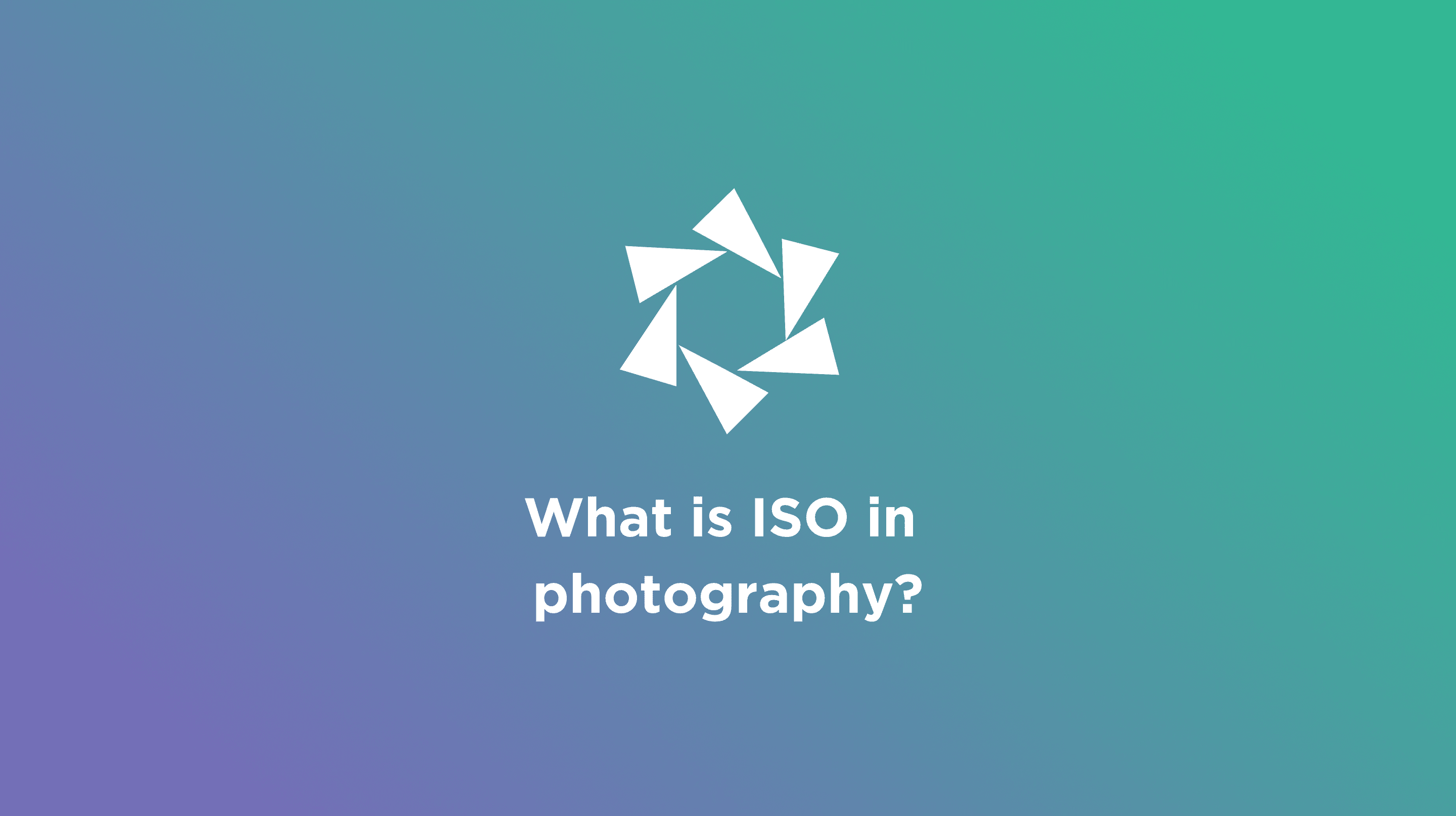 When it comes to taking a properly exposed photograph, three of your digital camera’s settings come into play — aperture, shutter speed, and ISO. These three settings work together in what’s commonly known by photographers as the exposure triangle.

But what exactly is ISO in photography?

In this guide, we’ll explain the meaning of ISO and discuss exactly how you can use it to get the best results in your photography.

In simple terms, ISO is a camera option that will either brighten or darken your photograph. Increasing the ISO number will make your pictures brighter and help you capture good shots in darker environments.

What does ISO mean?

Perhaps you have heard this term before, but not many know what the ISO abbreviation actually means. The acronym ‘ISO’ stands for International Organization for Standardization, a group that has created tens of thousands of technology and product standards, including those for film sensitivity.

Back in the days of traditional film photography, ISO referred to the film’s sensitivity to light. You may have seen rolls of film with a 100, 200, or 400 ISO. The lower the number, the lower the sensitivity of the film.

So, if you were shooting outside in bright daylight, you would buy ISO 100 film knowing that it would be exposed to a lot of sun.

Alternatively, if you were planning to photograph an indoor event, you would buy ISO 400 film to capture brighter photos in a darker space. When the industry made the switch to digital, the term ISO was adopted to describe the sensitivity of the camera’s sensor, since it replaced film in cameras.

What is ISO in photography?

It still is a camera setting, but playing with it can give your photographs a different look. There’s always a trade-off between a higher ISO value and the noise level of the photoshoot.

Raising your ISO will always add grain to your photos, also referred to as noise in the previous sentence, so the resulting photo might not be as crisp and sharp as you’d like, thus, rendering it unusable.

You should only raise your ISO when you are unable to brighten the photo via shutter speed or aperture instead (for example, if using a longer shutter speed would cause your subject to be blurry). That said, there are plenty of times when you’ll need to use a high ISO to compensate for low light.

How does ISO affect your photographs?

To understand how changing your ISO setting will affect your photographs, it helps to look at the exposure triangle.

Each of the three elements of the triangle works together to basically lighten or darken your image. When you adjust one of them, the other two are also affected. In the case of ISO, you’ll always want to stick to the lowest number possible.

When a high aperture is needed or when your subject is in motion and you have to decide between a blurry photo or a bit of noise, you bump up your shutter speed.

Don’t worry if this is a bit confusing, we’ll give you some example scenarios a little later.

What is ISO on a camera? Well, as explained before, it’s an option you can play around with. All cameras are different, but they all will include a common set of ISO values (commonly known as “stops”).

This is important, because the base ISO, or lowest ISO, gives you the sharpest photo with the least amount of noise. You should always try to use your camera’s base ISO to get the best quality images. However, that’s not always possible.

Some cameras offer extended high and low values for ISO that will allow you to set your ISO above or below your camera’s native range. These are simulated ranges, however, and will reduce your image quality. It’s not recommended that you use them.

Remember, ISO is your camera sensor’s sensitivity to light, so when you increase your ISO, you make it more sensitive to light, therefore, your photos will be lighter.

It seems like it would be simple to just bump up your ISO whenever you need to brighten a photo but that’s definitely not the case. Whenever you make your camera more sensitive to light, you also introduce more noise, grain, and unwanted digital artifacts into your images.

This is why, unless conditions require it, you should always avoid shooting at high ISOs. Instead, adjust your shutter speed or aperture to allow more light to hit your camera’s sensor whenever possible.

Take a look at the two photographs below. While they are both exposed properly, you can see how the photo that was shot with a higher ISO has more noise. The one taken at a lower ISO used a slower shutter speed and a wider aperture to allow more light to hit the sensor resulting in a photograph with less noise.

The difference here may be subtle, but higher ISOs will result in an even greater amount of noise in your photographs and lower-end cameras will produce even noisier results than what you see here.

How to set ISO on your camera

The exact method of changing your ISO varies slightly from camera to camera, but the general instructions are the same. First, you’ll need to set your camera to Manual, Shutter Priority, Aperture Priority, or Program Mode.

If you’re using an entry-level DSLR or mirrorless camera, you can access your ISO through a menu. There, you’ll be able to select the value you want. You’ll also have the option to choose “Auto ISO”.

More on that below.

If you’re using a prosumer or higher-end camera, you more than likely can access your ISO with an ISO button on the top or back of the camera or by spinning one of the wheels to quickly change it.

Check your camera’s manual for the exact instructions on the easiest way to change your ISO setting as, since you’ve just learned, this is a setting you’ll need to change often.

What is Auto ISO and when to use it?

Auto ISO is a feature that tells your camera to automatically choose the best ISO value to properly expose your photo based on the aperture and shutter speed that you choose. It can be especially helpful in situations where there’s a lot going on or the light is constantly changing and you don’t have time to respond to the changing conditions.

Some examples when Auto ISO comes in handy are when shooting sports, during a concert or show with changing lights, or when photographing a family outing with a lot of active children.

If you do choose to shoot with Auto ISO, it’s a good idea to also set the maximum ISO, rather than letting the camera choose an ISO that’s higher than you’re comfortable with.

What ISO should I use and when?

Choosing the right ISO for your situation can be confusing to someone who’s just starting. While we always say that you should use your base ISO whenever possible, we also know that’s rarely possible.

From overcast days outside to action shots that require a high shutter speed, sweeping landscapes at dusk, and family photographs inside — lighting conditions vary as much as the subjects we photograph and for that reason, you’ll probably need to adjust your ISO often.

Here are some general rules of thumb when choosing your ISO based on lighting conditions:

It may not seem like it now, but choosing your ISO setting will eventually become second nature to you as a photographer.

But as a beginner, when you’re choosing what ISO to start with, ask yourself these questions about the scene you’re getting ready to shoot:

If you’ve got plenty of light, don’t want any noise or grain in your images, and your subject isn’t moving, you are generally safe to choose a low ISO setting.

If it’s dark, you want to add grain to your image, your subject is in motion, and you don’t have a tripod, you’ll probably need to increase your ISO so that you can shoot with a faster shutter speed to freeze motion and still expose your photograph properly.

Here are some example scenarios and the ISO settings:

A bright, sunny day at the beach is a perfect setting for using a low ISO. However, since the subject is in motion, you’ll also need a fast shutter speed if you want to freeze his action. In this case, you’ll want to increase the ISO from base to 200 to compensate for that higher shutter speed.

Daylight that filters in through a window is a perfect way to light your subjects if you’re photographing them indoors, whether you’re shooting a family member or a furry friend. In this case, the photographer used a high aperture of f/11 and zoomed in on his cat to get all that detail in her eyes and face.

Because of that high aperture and lower light conditions indoors, he set his ISO to 560 to properly expose the photograph.

An overcast sky can be a blessing for photographers. Think of it as a huge diffuser, softening the light over everything you shoot, eliminating harsh shadows and bright hot spots.

That said, the lower lighting conditions present with an overcast sky, combined with the fast shutter speed you’ll need when shooting wildlife that’s in motion will mean you need to increase your ISO to properly expose your shots.

This photographer beautifully captured a brown pelican in flight by using a high shutter speed of 1/1250 combined with a deep depth of field. Both of those limit the amount of light entering the camera, meaning he had to raise his ISO to nail the exposure.

Example Scenario: Landscape at Sunset with a Tripod

A photo at sunset means low light, so you’re probably thinking that means you’ll need a high ISO, right? But, not this time — not when you have a tripod!

A tripod allows the photographer to take this gorgeous long exposure photo, keeping his shutter open as long as necessary without introducing camera shake. The result is silky smooth skies and water while the dock remains tack sharp.

What’s more, the other benefit of having the shutter open so long is that plenty of light reached the sensor. The photographer could set the camera to its base ISO setting, ensuring the highest quality photo possible.

Understanding the meaning of ISO will go a long way toward getting your camera out of Auto and taking full control of your art.

To fully master exposure, the best thing you can do is experiment with some hands-on practice.

Take a photograph, then change your ISO and see how that change affected your photograph. Did it turn out how you expected?

Self-taught entrepreneur with a deep passion for learning, understanding human nature and what drives businesses forward. Our products are being used by over 500,000 users, daily.